A team of researchers at the Swiss Federal Institute of Technology in Lausanne (EPFL) has engineered a hole-transporting material for perovskite solar cells that costs only a fifth of other existing material options, and offers an improved efficiency of 20.2%. 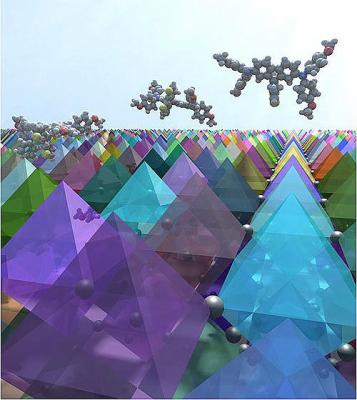 A 3D illustration of fluorine-dithiophene molecules on a surface of perovskite crystals.

The scientists state that the best performing perovskite solar cells use hole transporting materials, which are difficult to make and purify, and are prohibitively expensive, preventing market penetration. By comparison, FDT is easy to synthesize and purify, and its cost is estimated to be a fifth of that for existing materials â€” while matching, and even surpassing their performance.

Dyesol sells over $7 million in stock