Australia-based Dyesol has been awarded a $449,000 grant from the Australian Renewable Energy Agency (ARENA) to commercialize an innovative, very high efficiency perovskite solar cell. ARENA has stated that the funding would enable Dyesol to create a roadmap setting out the steps needed to take its perovskite solar cell technology from the lab to a commercially available product. Dyesol will map out the techniques and requirements for working towards scalable manufacturing of high-quality, uniform perovskite cells that achieve efficiency, durability and stability targets. As declared, Dyesol is initially aiming for a delivery cost benchmark of US 10 cents per kWh, putting perovskite solar PV cells on par with current benchmarks achieved by silicon solar PV. This would be a considerable achievement given silicon PV’s maturity as a technology, and provides…

Efficiency of over 20%, which rivals traditional silicon cells, has already been reported in perovskite cells, but such high efficiency ratings have been achieved using cells only a tenth of a square centimeter in size, too small to be used in a solar panel. This research, however, shows that it is feasible to obtain 15% efficiency on cells larger than a square centimeter through improved processing.

The fabrication process designed by the researchers builds on a previously reported method, previously developed in Brown University. Perovskite precursors are dissolved in a solvent and coated onto a substrate. Then the substrate is bathed in a second solvent (called anti-solvent) that selectively grabs the precursor-solvent and takes it away. The result is an ultra-smooth film of perovskite crystals. The researchers in this study developed a trick to grow the perovskite crystals to a larger size – to add excess organic precursor that initially “glues” the small perovskite crystals and helps them merge into larger ones during a heat-treatment, which then bakes away the excess precursor.

The method yields a film with fewer defects and higher efficiency. The 15% efficiency reached in this latest work is a good start, but thereéˆ¥æªš still room to improve. Ultimately, the researchers say that they would like to reach 20-25% in large-area cells.

Researchers at the Helmholtz-Zentrum Berlin (HZB) developed a process for coating perovskite layers with graphene for the first time, so that the graphene acts as a front contact. A traditional silicon absorber converts the red portion of the solar spectrum very effectively into electrical energy, whereas the blue portions are partially lost as heat. To reduce this loss, the silicon cell can be combined with an additional solar cell that primarily converts the blue portions and a particularly effective complement to conventional silicon is perovskite. However, it is normally very difficult to provide the perovskite layer with a transparent front contact. While sputter deposition of indium tin oxide (ITO) is common practice for inorganic silicon solar cells, this technique destroys the organic components of a perovskite cell. The HZB scientists… 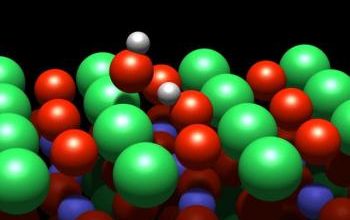