Researchers at the Okinawa Institute of Science and Technology Graduate University (OIST) have revealed the cause for the short lifetime of perovskite solar cells with silver electrodes, and propose a mechanism for preventing it and improving the lifetime of such cells. 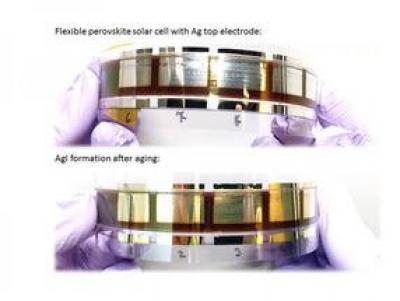 Silver electrodes are a less-expensive replacement for common gold electrodes, and to keep the cost even lower, the team in this study wanted to use solution-processed method to fabricate the layers of the solar cell, instead of expensive vacuum-based techniques. The problem of using silver electrodes and the solution-based method is that silver gets corroded within days of the solar cell fabrication. The corrosion makes the electrode turn yellow, and reduces the efficiency of the cell. The researchers analyzed the composition of the corroded silver electrode and identified the formation of silver iodide as the reason for the electrode corrosion. They also found that exposure to air accelerates the corrosion, when compared to dry nitrogen gas exposure.

The team suggested a mechanism to control this damage: silver iodide forms because gas molecules from ambient air reach the perovskite material and degrade it, forming iodine containing compounds which diffuse to the silver electrode and corrode it. The migration of both air molecules and iodine-containing compounds could happen through small pinholes present in the spiro-MeOTAD HTL layer. Preventing the formation of pinholes in the spiro-MeOTAD HTL layer is essential for a longer cell lifetime, so the team is working on producing pinhole-free solar cells with the solution-process method, while the production of pinhole-free HTL with the vacuum-based method has already been published by the same group.