Researchers from Helmholtz-Zentrum Berlin (HZB) and the university è ¡cole Polytechnique Fèdèrale de Lausanne (EPFL) in Switzerland have combined a silicon heterojunction solar cell with a perovskite solar cell monolithically into a tandem device and reached a record efficiency of 18%, stating it has the potential to reach 30% after additional modifications. 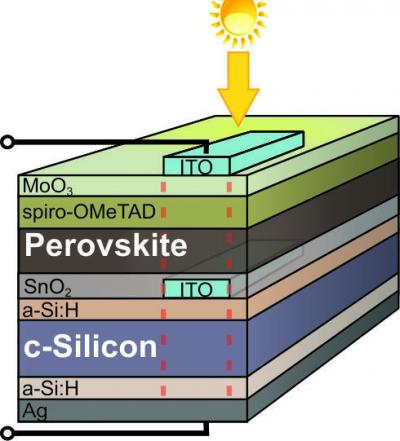 Designing such silicon-perovskite tandem cells can be challenging, as perovskite cells tend to require coating onto titanium dioxide layers, which must first be sintered at around 500 æ³C. The amorphous silicon layers that cover the crystalline silicon wafer in silicon heterojunction degrade at this temperature. Now the team from EPFL and HZB has managed to overcome hurdles and manufacture this kind of monolithic tandem cell, by depositing a layer of tin dioxide at low temperatures instead of using titanium dioxide. A thin layer of perovskite could then be spin-coated onto this intermediate layer and covered with hole-conductor material. The team also used a transparent protective layer to avoid the metal oxides sputtering and consequently destroying the perovskite layer and hole-conductor material.

The teams claim there is even potential to reach efficiency levels as high as 30%. They are happy with the 18% efficiency, but say that light is still being lost at the surface in the present architecture and that could potentially be dealt with. A textured foil on the front side might be able to catch this light and couple it into the cell, which would further increase the cellé¥æª efficiency. The heterojunction silicon solar cell that simultaneously functions as the bottom cell and the substrate for the perovskite top cell also has potential for improvement. Also, this perovskite-silicon tandem cell is presently still being fabricated on a polished silicon wafer. By texturing this wafer with light-trapping features, such as random pyramids, the efficiency might be increased further to 25% or even 30%.