Researchers at TU Wien (Vienna) explored the long-standing question of how water molecules behave when they attach to a perovskite surface, by using scanning tunneling microscopes and computer simulations. 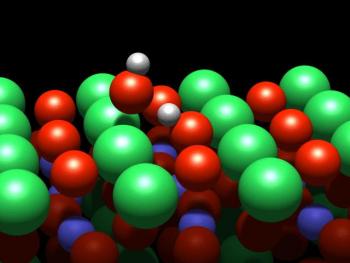 While usually only the outermost atoms at the surface are of importance, in perovskites the deeper layers are important, too. The team studied strontium ruthenate – a typical perovskite material that has a crystalline structure containing oxygen, strontium and ruthenium. When the crystal is broken apart, the outermost layer consists of only strontium and oxygen atoms; the ruthenium is located underneath, surrounded by oxygen atoms. A water molecule that lands on this surface splits into two parts: A hydrogen atom is stripped off the molecule and attaches to an oxygen atom on the crystal’s surface. This process is known as dissociation. However, although they are physically separated, the pieces continue to interact through a weak “hydrogen bond”.

It is this interaction that causes a strange effect: The OH group cannot move freely, and circles the hydrogen atom. Although this is the first observation of such behavior, it was not entirely unexpected as this effect was predicted in the past, based on theoretical calculations, and was finally confirmed with this experiment. When more water is put onto the surface, the spinning stops as the OH group can only move freely in a circle if none of the neighboring spaces are occupied. At first, when two water molecules are in neighboring sites, the spinning OH groups collide and get stuck together, forming pairs. Then, as the amount of water is increased, the pairs stick together and form long chains. Eventually, water molecular cannot find the pair of sites it needs to split up, and attaches instead as a complete molecule.

The new methods that have been developed and applied by the TU Wien research team have made significant advances in surface research. Whereas researchers were previously reliant on indirect measurements, they can now directly map and observe the behavior of individual atoms on the surface. This opens up new possibilities for modern materials research, for example for developing and improving catalysts.

Technical / research
Above are Water molecules’ behavior on perovskite surfaces offers important tools for surface and materials research web publication,Hope can help you.