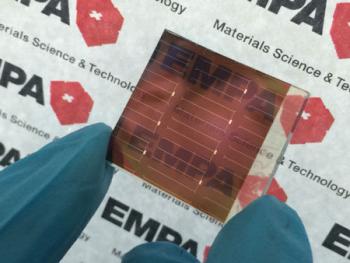 The perovskite film is made with a combination of vapor deposition and spin coating on the layer, followed by annealing at lukewarm temperature. This perovskite crystal absorbs blue and yellow spectrum of visible light and converts them into electricity. Red and infrared radiation simply pass through the crystal, as a result of which, a further solar cell under the semi-transparent perovskite cell can be attached, which converts the remaining light into electricity. The perovskite crystal is processed at 50 degrees Celsius and the process can be potentially applied in low cost roll-to-roll production in the future. The research team also said that the techniques can be applied for large area low cost processing.

The scientists will have to overcome many obstacles, and to do this they will need lots of interdisciplinary experience and a large number of combinatorial experiments until a semi-transparent high-performance cell is found together with the right base cell, and technologies for electrical interconnections of these solar cells.

Dyesol sells over $7 million in stock