Researchers at TU Wien (Vienna) explored the long-standing question of how water molecules behave when they attach to a perovskite surface, by using scanning tunneling microscopes and computer simulations. While usually only the outermost atoms at the surface are of importance, in perovskites the deeper layers are important, too. The team studied strontium ruthenate – a typical perovskite material that has a crystalline structure containing oxygen, strontium and ruthenium. When the crystal is broken apart, the outermost layer consists of only strontium and oxygen atoms; the ruthenium is located underneath, surrounded by oxygen atoms. A water molecule that lands on this surface splits into two parts: A hydrogen atom is stripped off the molecule and attaches to an oxygen atom on the crystal’s surface. This process is known as dissociation. However,…

Researchers at EPFL in Switzerland have designed a standardized way to make nanowires out of perovskite, by guiding the growth of perovskite nanowires with nanofluidic channels. The researchers used a single-step, â€œslip-coatingâ€ method to produce the first ever nanowires from methylammonium lead iodide, a material that has attracted attention for its ability to absorb light and produce electrical current in response.

Nanowires are extremely thin, and perovskite nanowires make outstanding candidates for the efficient transport of electrons and excitons â€“ the recyclable â€œholesâ€ that electrons leave behind when they move as a current. Using nanowires could increase the efficiency of solar cells, because the wires act as “direct conductive highways” to transmit current more efficiently.

The problem is that it is difficult to grow the billions of nanowires needed for applications with the exact same length and diameter. The challenge, therefore, is to control the growth of perovskite nanowires in a way that can produce a 2D surface that could be used in a solar cell. Using nanofluidic channels in an automated way, the researchers were able to produce tens of thousands of parallel nanowires on a silicon surface. The growth process was visualized in real-time with a simple optical microscope, which shed light into the crystal growth mechanism.

The technique represents a big step forward in nanowire technology. Because it is automated, it also paves the way towards fabrication of wafer-scale perovskite nanowire thin films, which are ideal for solar cells, but also for other optoelectronic devices, including lasers, light-emitting diodes (LEDs) and light detectors.

Researchers at Pennsylvania State University have developed a transparent and electrically conductive material that could make large screen displays, smart windows, touch screens and solar cells more affordable and efficient. The material has the potential to replace indium tin oxide (ITO), the transparent conductor that is currently used for more than 90% of the display market but is expensive, scarce and brittle.  Along with display technologies, the researchers will investigate the new materials with a type of solar cell that uses organic perovskite materials. The team has reported a design strategy using 10 nm-thick films of an unusual class of materials called correlated metals. In most conventional metals, such as copper, gold, aluminum or silver, electrons flow like a gas. In correlated metals, such as strontium vanadate (a perovskite material)… 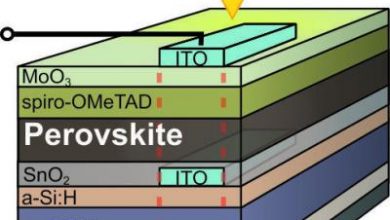