Researchers at EPFL have designed an ultra-sensitive carbon nanotube-based photodetector, sensitized with perovskite nanowires which make it highly responsive. 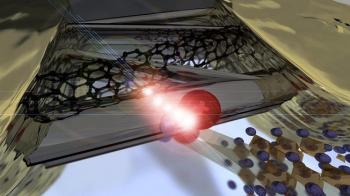 While carbon nanotubes are often used in photovoltaic and optoelectronic devices, light detection with pristine carbon-nanotube field-effect phototransistors is currently limited to the range of 10% quantum efficiency (the responsivity of the best carbon nanotube devices is around 0.1 A/W). Using perovskites, EPFL scientists have now fabricated a carbon-nanotube photodetector with responsivity as high as 7.7è ³105 A/W.The researchers at EPFL built the device and overlaid it with perovskite (CN3NH3PbI3) nanowires to sensitize its light-detection capacity. The extremely high performance is a result of the two materials working together: the perovskite nanowires can convert incoming light into free charge-carriers with high efficiency, while the carbon nanotube transfers the electrons to the detection circuit.

In addition, the team found that high-powered light can turn the normally conducting device into an insulator. This last feature means that the device performs three-state logic operations, which can be used in digital optoelectronics, allowing multiple circuits to share the same output line or lines.

EPFLPerovskite applicationsTechnical / researchEPFLHybrids and related materials
Above are Perovskite nanowires and carbon nanotubes make for a highly responsive photodetector’ web publication,Hope can help you.